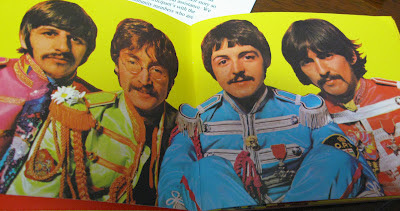 Although I had been enjoying The Beatles' music since I was in sixth class at Belmont Public School, I had never owned a Beatles album, and had just one or two of their EPs (extended play seven inch records, which usually contained four songs). Apart from those I had only heard their music on the radio, or at a friend's place.

When it was announced that they were releasing an exotic new record called Sergeant Pepper's Lonely Hearts Club Band, I asked my parents if I could have a copy for my fifteenth birthday. When I found that Mum now had the record in the house, I was mad with excitement. I couldn't wait to hear it. Radio stations mainly played singles, and very little of it had been heard on the Newcastle stations I listened to.

I found that it was every bit as interesting as the publicity had made out.  There were so many layers, you could listen to the whole album, concentrating on Paul McCartney's inventive bass guitar lines, or you could try to ignore the lead vocal and listen instead to the vocal harmonies accompanying the main part.

When I bought a copy of the sheet music, I  was shocked to discover that it only contained some of the songs, and only parts of some of the ones it did include. The notation had been done poorly and was not a good representation of the sounds I heard on the record.

So I had a crack at playing the songs on the piano, as I heard them. It wasn't hard to improve on the shoddy job done by the person who had done the piano/vocal arrangement.

It was a lot of fun working the songs out for myself. I learnt a lot about chords and chord progressions from listening, playing and also reading the chord symbols on popular sheet music.

But sometimes I would be stumped. I remember, a little later, trying to play Penny Lane. Most of it was easy: I loved the descending, walking bass line in the verse, but was frustrated by a mysterious chord change in the chorus. Whatever was the chord on the capitalised word?


Penny Lane is in my EARS
and in my eyes

It sounded like a chord change, but none seemed to work.
Try as I might, I could not find a suitable chord. So next time I was in Newcastle for a piano lesson, I went to Palings music store, bought the sheet music for 35 cents and discovered that the chord is the tonic chord, the same as the preceding one, but is in first inversion [the bass note is the original middle note of the chord].
THAT was a revelation to me, much the same as the odd bass notes in The Beach Boys' God Only Knows were to Paul McCartney.

table of contents
Posted by David McKay at 5:32 pm