When we returned to Newcastle, we didn't have a place to live, because Uncle Ben had passed away while we were on our honeymoon. We must have stayed with Joan's folks for a few days, but in a short time we found a flat in Dickinson St, Charlestown.

It was one of four flats, and was advertised at $16 per week. But don't forget that my teacher's scholarship allowance before I got married was $28 per fortnight. In those days, students who lived away from home and married students got an increased allowance, of a whole $88 per fortnight.

When we moved into Flat 1/64 Dickinson St, Charlestown, the rent had been increased to $17. The landlady was Mrs Hedges, a pensioner, but her son Lionel handled things for her. Our first experience of renting was positive, because they were very kind and helpful.

Shortly after we moved in, the power went off one night, due to a fuse blowing. I didn't have a clue how to rectify matters, but the next-door neighbour, Mr Parmeter, the Adamstown postmaster, soon had our lights on again.

The flat was so small, it appeared that our piano was in the kitchen. But we managed to teach a few piano and guitar students to supplement our meagre funds. (And our parents made sure we didn't go broke.) 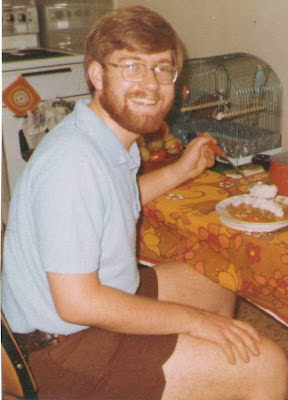 I'm in our little flat in this photo, but a few months after we were married, we took the opportunity to move into Flat 3, which was a little larger, having a lounge room and separate kitchen. It also had fleas, but the owners kindly fumigated the flat for us. This flat was a whole $20 per week.

A new couple took over Flat 1, who used to enjoy playing their radio at fairly high volume. You would often hear Abba blasting the airwaves with Waterloo.

In those days, I used to enjoy accompanying a singer called Shirley Frazer. I don't remember us having many gigs, but we must have done a couple. Shirley and her husband had been members of Park St Methodist Church, but had decided that the Methodist Church was straying further and further away from the teachings of the Bible, and had joined The Christian and Missionary Alliance, a church I had not previously heard of.

Shirley told me that she and her husband got a bit of stick from one family who held similar conservative views, but felt that loyalty to the local church trumped loyalty to the gospel. (Martyn Lloyd-Jones and John Stott had a similar disagreement.)

Shirley was probably in her late forties or early fifties. She and her husband ran Al's Pizzeria, on Pacific Highway, Charlestown. When we had a few spare dollars, we used to go there for an occasional meal. They used to play tapes from a very dodgy wonky cassette player, which made you feel a bit whoozy, due to the music continually speeding up and slowing down.

table of contents
Posted by David McKay at 4:03 pm