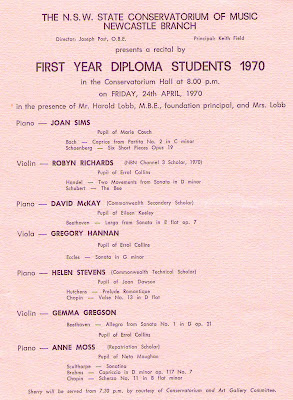 When I was in sixth form, I started a performance diploma course at Newcastle Conservatorium. It was a great experience, but I didn't last the year out.

I remember being nervous playing in this concert: but I still love playing the second movement of Beethoven's Sonata in E Flat major, op 7. The whole sonata is a terrific piece of music. A girl called Joan Sims played the Caprice from Bach's Partita in C Minor.

Anne Moss was a Christian girl and once took Joan and myself to a youth meeting (if I remember correctly) at St Augustine's church in Merewether. I adore the Chopin Scherzo in B Flat Minor. She played it so well, showing off its beauty and drama. I wonder whatever happened to Anne? 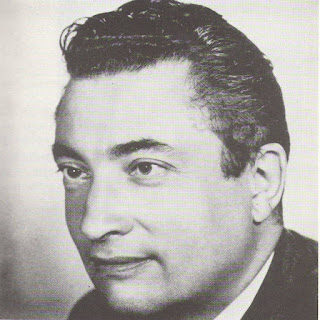 The next year, I attended a concert where William Coombes sang. He was a wonderful singer, and sang so naturally. We were privileged to hear him sing Vaughan Williams' Songs of Travel, and later the solo part in the Fauré Requiem.

It was 13th August, the day that Joan Sims got her driver's licence. I congratulated her, shaking her hand, which was rather courageous of me.

We sat together in the concert, which I enjoyed very much. 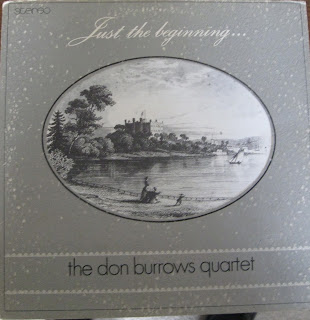 One month later, I bought Joan a present for her 18th birthday, which was Don Burrows' Just The Beginning, because I was hoping that this was just the beginning of our friendship.

It was the first Australian jazz recording to "go gold", and sell ten thousand copies.It has been made a part of The National Registry of Recorded Sound. Two of my favourite tracks are the first one, Passing the Bach and the group's terrific arrangement of Tárrega's Recuerdos, featuring the familiar intricate guitar part, but also Don Burrows' wonderful alto flute playing.

Before long, this beautiful girl played Debussy's First Arabesque for me. I was taken aback by the sensitivity in her playing. I had little nuance in my playing before I met Joan. I've certainly learnt plenty from my piano teachers, but more from Joan, who is a wonderful musician and teacher. 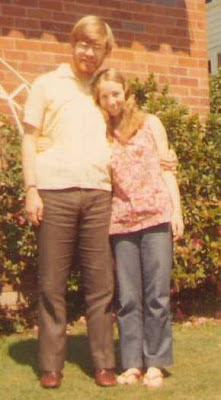 table of contents
Posted by David McKay at 12:02 am