What did the Arts graduate say to the Science graduate?
"Do you want fries with that?"

I was firmly in the humanities mould. I coped with Arithmetic pretty well in primary school (but still don't know why they marked it out of 200 and everything else out of 100), but didn't do nearly as well in high school. My marks were quite reasonable, but not near the top of the class as they had been.

I found the geometry theorems interesting, and enjoyed the pun which my father told me, when he said that Q E D, written at the end of a proof, signifying quod erat demonstrandum (which was to be proved), also stood for Quite Easily Done.

We had a good Maths teacher from first to fourth form: Mr Steinmetz, whose hair had gone prematurely white. He was a kind, but no-nonsense sort of man. 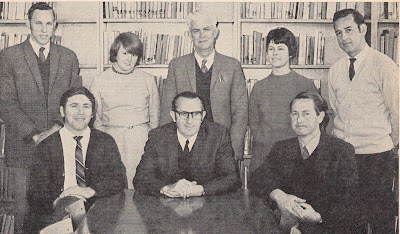 Boys in my fifth form class gave our new teacher a hard time, and used to mimic the opening music from the 1950s Dragnet TV series when he entered the room:

And some also used to play table tennis at the back of the classroom, while the lesson was in progress, using black gloomy-looking Maths textbooks for bats and net.

Maybe that's why our teacher in sixth form was the Maths master, John Sheriff. He didn't like students mindlessly copying things from the blackboard while he was speaking.

When we were at school, blackboards were actually green, but they were most certainly chalkboards. However, towards the end of my time in high school,  the Music classrooms had whiteboards and textas, so that the chalk would not get into the gramophone records.

But Mr Sheriff's solution was to make us put our pens down and watch and listen. Then, after he had demonstrated his point, he would rub the material off the blackboard, and then tell us to write it down!

Although I had a better memory then than I have now, I missed quite a bit, and had to buy a book of formulae to get me through 2S Maths.

John Sheriff became deputy headmaster of Warner's Bay High School, when Margaret and Kevin's children Jamie and Tammy were there. The students used to love singing


I shot the sheriff
But I did not shoot the deputy

which they knew from the Eric Clapton version of Bob Marley's song.

I was even worse at  Science than I was at Maths, and was demoted to 3B, in 1967. Oh, the ignominy!
Our teacher was Bob Horne. He was young then. He enjoyed geology, but I found it thoroughly boring. Mr Horne's Science experiments never seemed to work. After each failure, he would say, "Well, this is what was supposed to happen."

But, on one memorable day, an experiment worked. He was demonstrating the displacement of water, and when he put a rock into a beaker of water, voilà! The water rose.

He used to enjoy goading the Christian students. We were firmly against evolution in Belmont Baptist Church, and one of the girls told the teacher she didn't believe in it. This was like a red rag to a bull, and Mr Horne invited God, if he existed, to strike him dead. Amazingly, the Almighty didn't let our teacher set his agenda, and Mr Horne survived.

I didn't do Science in fifth or sixth form, and studied Music privately, doing the AMEB HSC course, which involved doing Seventh Grade practical and Sixth Grade theory. I think my piano teacher, Miss Keeley supervised my Sixth grade theory. Don't tell my Music Craft students at Mitchell Conservatorium, but I only managed a credit!

table of contents
Posted by David McKay at 11:40 pm