PAGE FORTY-FOUR: the worst day of my life

I have spent my life in pleasant, but sedentary work: mostly Music teaching, whether in a classroom or studio.

But on three occasions I have had the experience of seeing how the other half lives - and I didn't like it. There was the period between school and Teachers' College working at the B haitch P, a period between finishing college and getting my first teaching job, working at the Sulphide Works at Cardiff, and one day's work for Avery Scales.

I assumed it had something to do with scales like the one on the left. But when we arrived, we were told we would be testing a weighbridge, by placing two fifty-five pound weights on it at a time, all day long, with a break for lunch.

It was a long day.  They issued us with gloves and urged us to wear them. I wore them. And I'm glad I did, because it was hard enough picking up 110 pounds of weights at a time, with them on.
At lunch time, we slept on the weighbridge. Even in 1974, it seemed such an old-fashioned way of going about things.

I was so sore, by the end of the day. It wasn't worth the meagre amount I got for my pains. 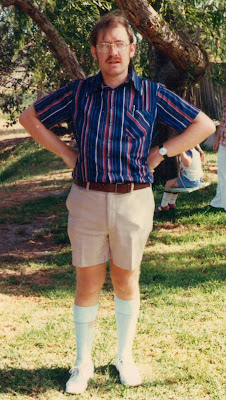 I suppose you get used to it, but I can't imagine having a job that involved such hard work, every day. It was easier at the Sulphide Works, though sometimes I had to carry ninety pound jackhammers up several flights of stairs. They tested us regularly for lead absorption, and made me shave my beard off, which I've only done three times in my life.

This photo, taken in 1978, is one of the few of me as an adult, sans beard, in Mum and Dad's back yard at Wommara Avenue. But we have a long way to go before we get there ...


table of contents
Posted by David McKay at 10:32 pm