PAGE TWENTY-NINE: it started with a ferry ride 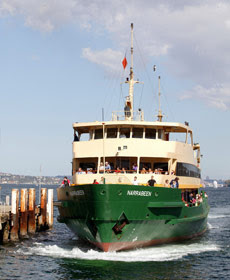 It all started with a ferry ride. I think it must have been sometime before Christmas, 1969. It was announced at church that YFC (Youth For Christ) was hosting a ferry trip and barbecue for young people. I don't remember if anyone else from our church went on the trip: maybe my sister Margaret or David Aiton came, but I'm not sure.

During the afternoon and evening we had a little harbour cruise and then went across to Stockton, where we heard a man called Keith Farmer give a talk which he had called The Gospel According to Father Christmas.

I think a young man called Don McDermott played his piano accordion on the ferry and at the barbecue. A few years afterwards, I was told he had been killed in a car accident. There was a small memorial to him on the old Pacific Highway, near Gosford, where you used to be able to hear bellbirds singing.

It was on this ferry ride that I met some lovely young folk from Cardiff Methodist Church,  including Susan, Jennifer and Margaret Grindley. I soon learnt that they were fellow musicians. Susan was the same age as myself, and Jenny's birthday was the same day as mine, but two years later. Margaret was a year or two younger than Jenny.

I always think of the middle Grindley girl as Jenny, but am aware that she preferred to be called Jen. But to me, Jennifer was a bit formal, and I couldn't get used to Jen. I hope she pardons me for referring to her as Jenny.

The girls sang together. Susan and Jenny wrote some songs, with Jenny accompanying their singing on acoustic guitar. Sometimes they wrote new words to existing popular songs (such as their version of Jimmy Webb's Wichita Lineman which became Ask and it shall be given you, delightfully pronounced with a short Pommie A), and sometimes they wrote the music, too.

We soon formed a music group to play at Youth For Christ, and used to rehearse at Cardiff at the Grindleys' place, at Cardiff Methodist Church or at our place in York Crescent, Belmont North.

We decided to call ourselves Revised Standard Version, intending to convey the idea that we wanted to share the Christian message in an up-to-date manner. I suppose that these days, we would be told that we couldn't use that name for copyright reasons. But back then, people didn't think like that.

I even had a go at writing a couple of songs myself, but I have never persevered with songwriting and have always been unsatisfied with the songs I've composed. I have a great admiration for those who write songs: both the lyricists and the composers of the tunes. It isn't easy to write words that sound effective, and it's also hard to write tunes which are memorable and singable.

table of contents
Posted by David McKay at 9:07 pm