I enjoyed singing in the school choirs and choral groups throughout high school. I knew almost nothing about singing before I entered high school (though I had performed a couple of songs in primary school, both in fourth class). I was briefly a tenor in first form, but soon became a bass. I was so ignorant, I had to be told not to breathe in the middle of phrases, and especially not in the middle of a word!

When I was in fourth class, we had a lovely teacher called Mr Warburton. Unfortunately he smoked like a chimney and died a few years after I left school. We were going for a medical appointment at Royal Newcastle Hospital, and met his daughter, Ann coming out of the revolving doors at the front.

I asked after her father, and she said he had died and she had his clothes in the bag she was carrying.

He played the piano, but I could hear some fudging in his left hand accompaniments at times. He was a friendly, kind man and I remember him directing us in a little play about Robin Hood. At one point in the play, Robin Hood is disguised and is speaking to the Sheriff of Nottingham, telling him that he, a humble archer, has killed Robin Hood.

The Sheriff asks: Are you sure that Robin Hood is dead, lying in the forest?

and Mr Warburton used to enjoy delivering the next line:
Robin Hood (in disguise): No man could ever lie, as Robin is lying now.

During fourth class, Mr W had me singing I am the very model of a modern major general, from The Pirates of Penzance and also dressed up as a black woman singing Lazybones to Ian Wyse, and giving him a whack with a broom as I did so. (It hadn't occurred to me that actors pretend to hit. Poor Ian!)

But, back to high school. In the photo you can see our two music teachers, Mrs Masters and Miss Johnson. Little did we know that there were two famous sex therapists who worked together with the same surnames. Students would have enjoyed the joke!

The students are myself, Greg Bellamy and Glen Davies, Margaret Maskey and Colleen Webb in the middle row, and Vicky Gleeson and Jan Gilkison in the front row. We used to sing negro spirituals, such as Who's that a-callin'? (These days they are called African-American spirituals.)

I used to play piano in an informal band with Greg and our friend Leonard Turnbull. But I was uneasy about forming a band when they asked me, because I thought it was wrong for a Christian to play in a dance band. (But I used to happily listen to the music. If we're honest, we are all inconsistent, aren't we!)

Glen and I spent a lot of time together at school and I used to go to his house in Lewers St and stay for a day or two, every now and again. His father was a butcher and had Liberace records. I think he found me to be irritating: I couldn't stop talking. It was probably a great relief when I went home.

I had lots of interesting conversations with Glen over the years. we had quite a lot in common, because we both learnt piano and both studied Music in the junior school. Glen attended the Methodist Church and took me with the church young people to his family's holiday place in Seal Rocks, where we slept in tents. I didn't enjoy the experience of having someone deflate my blow-up bed during the night. 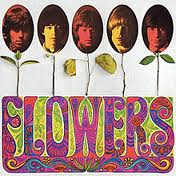 But I did like the jaffles which were toasted over a campfire. A boy called Duncan told me that a jaffle was a cast-iron bra, which he thought was a huge joke.

I first heard the Rolling Stones compilation album Flowers at Greg Bellamy's place. I still think it is a great collection of songs. It was one of the first which I played on my 2MCE.org community radio album program.

table of contents
Posted by David McKay at 11:46 pm