PAGE THIRTY-FIVE: Dad to the rescue 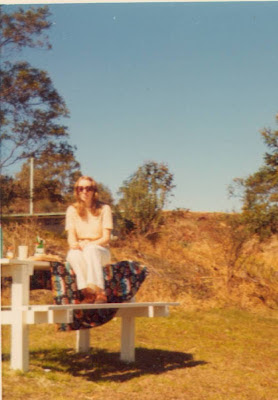 What do you do when you have a girlfriend, but no passenger seat in your Morris 1000 panel van?

You ask your Dad to put a seat in for you.

I have never been a handyman, and find most things to do with household repairs, fixing cars, and the like to be a big mystery. I have learnt to do some few things, but have also had to know my limitations.

Dad worked so hard in his job and also at home, but he was very pleased to help me with my car. He did some work on it on 25th September, 1971. Maybe that was the day that he removed the gigantic battery and the box over it, and replace it with a passenger's seat.

Now Joan and I could go out for picnics, and off to Youth For Christ and other places together. The two photos, taken on the same day, were from one of our picnics up the Hunter Valley somewhere; possibly Paterson.

We enjoyed going to two YFC camps at Tallebudgera Creek, on the Gold Coast in 1971 and 1972. The first time we travelled by train, but when we went in 1972, we were passengers in someone's car. I forget their name: I wonder if Joan remembers? 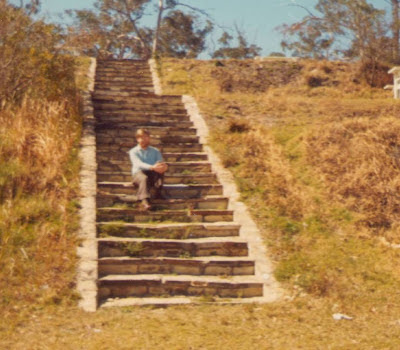 At one of these camps, we first heard John Smith, the famous pastor to bikies. He spoke powerfully and wanted us all to know that being a Christian is more than having a set of beliefs. He taught us that encountering the living God should transform our lives.

John was a living example of this in his ministry to people often shunned by others. 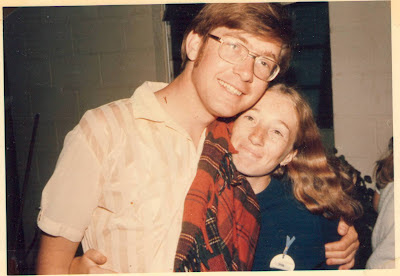 At the camp, Joan introduced me to her lovely friend, Susan Ridley, who took this photo. Susan is such a lot of fun. she is a cellist and pianist, and has some unique expressions, which I love. When she was leaving she would say "OK you geezers: time to choof off," and off she'd go. Susan took this photo of Joan and me at the second camp we went to.

In 1971, the Rev Alan Walker, the Methodist minister who founded Lifeline, led a mission at Vision Valley in Arcadia. I went to one of the training sessions, and sat in a prayer group so close to Fred Nile, who was leading our little group, that our knees touched.

I drove to the Newness Mission camp and slept in my van on a mattress. When I got home, Mum told me to take that mattress out of the car ... and I did! My car was never going to be a shaggin' waggon, if Mum had anything to do with it.

table of contents
Posted by David McKay at 12:40 am