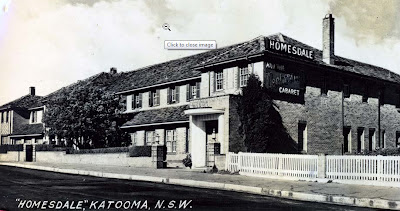 It came as a surprise to me and a shock to her parents when Joan announced that she was intending to go to Bible college in Katoomba.

She had seen an advertisement in the Methodist monthly newspaper, I think.

At first her family thought we were splitting up and she was escaping: get thee to a nunnery, perhaps?

But that wasn't the reason she decided to go. The college was run by Ambassadors For Christ and had previously been located in the Illawarra: hence, the title as one of my favourite people says.

The dark old building in Katoomba used to be a guesthouse.

It was pretty sobering being so far apart, just after I got back from India, because Joan began college in early 1973 and stayed there for the rest of the college year. We married on 24th November, 1973.

My title was one of the parodies of the college's name. I understand that many Christian organisations were similarly lampooned. The China and India General Mission's acronym was said to stand for Come In: Get Married.

But while it was true that Joan came to college unwed, and was married a few months later, it wasn't anything to do with the college.

Joan had been busy with her music when she was growing up and had not spent much time in the kitchen. One advantage of her year in Katoomba, was that she learnt to cook.

She wrote some very interesting assignments at college and I even typed at least one out for her on my old Olivetti typewriter. I think it was an assignment on Creeds and Confessions.


The college had strict rules about how long you could spend in the shower and I certainly wasn't allowed in Joan's bedroom. You couldn't hang your washing out on the Lord's Day, even if it was the first fine day in a fortnight! I attended a few lectures, which I found very interesting.

It was not an easy year, being apart from one another for most of the time, but I made regular visits to Katoomba and Joan came home a few times, too.


The road to Katoomba was not nearly as good as it is today, and most of it was only two lanes. there were a few places where an overtaking lane had been created, but these were only a few hundred metres long. If you wanted to overtake a slow truck, you had to do it pretty smartly.

During  Joan's year in Katoomba, there were a few people who made us feel at home, and I'm pleased that we are still in contact with some of them, today. 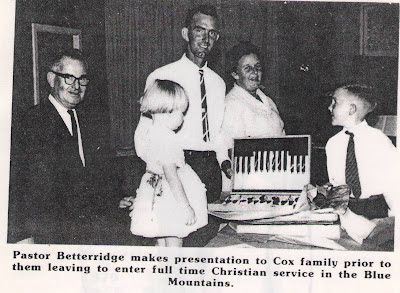 This photo shows a farewell at Belmont Baptist Church to Keith and Merle Cox, who went to The Grange, a Scripture Union campsite in Mt Victoria. I attended  some camps there, we went there as a family, and Joan and I were always made to feel at home at The Grange and visited Merle and Keith several times, both before we were married and afterwards.

Keith was a gifted bricklayer and handyman who transformed so much of the campsite. Merle had a flair for cooking for large numbers of people and some of her recipes were featured in the book Ministry to the Interior. Merle had poor health for many years and died at quite a young age. She was a great friend to my mother, who had met her when Merle was working in the Scripture Union bookshop in Newcastle.

We also knew some Youth For Christ folk in Katoomba, and Joan gave Peter and John Armstrong their first guitar lessons. Their father, Bob Armstrong, was NSW YFC director. He and his wife Enid are lovely people who were also very kind and welcoming to us.

Keith and Rosemary Painter were fellow students at the college with Joan. We have had contact with them, on and off, ever since. They now live in Raglan, an outer village of Bathurst. Keith is a tour guide at Jenolan Caves. We were both census collectors in the 2006 census.
This cropped version gives you a better view of my beautiful fiancée. 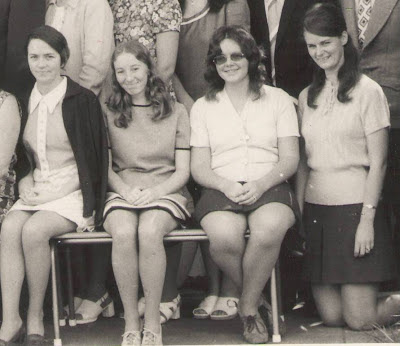 table of contents
Posted by David McKay at 12:23 am

Well, this brought back loads of memories for me this evening. Sadly, Rev Colin Jones passed away today - he would have been 93 next month. I was the college secretary from the start of 1973 to the end of 1975 - I'm in the front row, fifth from the left, with long pigtails. Mr Jones was Vice Principal the first year and Principal the following 2 years. (Colin and Muriel Jones also started at IBC at the beginning of 1973 and left at the end of 1975.) We have been friends all these years. My dad (Frank Caulfield) was college handyman. I remember Joan, and the Armstrongs whom you mentioned - am still in touch with Peter and John via facebook. Thanks for the memories.
Dot Chartier (nee Caulfield)

Thanks Dot. I don't remember seeing this before!