Getting acquainted with Joan and spending time with her at her home in Adamstown Heights taught me all sorts of things: one painful discovery was that there are people in the world who enjoy watching sport on TV.


The English are not very spiritual people, so they invented cricket to give them some idea of eternity. 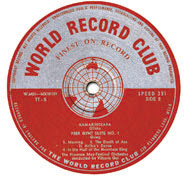 But I also learnt a lot about music from going to Joan's place. Her parents had some great gramophone records and Joan had quite a collection, which she was building up, through the wonderful World Record Club.

The only classical music I knew was the pieces I'd played on the piano or had heard in my Elective Music classes in junior high school. I was quite ignorant, because for a long while the only classical record we had at home was an old RCA Victor record of Strauss waltzes.

Later on, Uncle Dave gave me a Beethoven Fifth Symphony LP, and then Mum and Dad bought a few 7 inch records (which played at 33 1/3 RPM) of pieces like Mozart's Eine kleine Nachtmusik.

But I always gravitated towards the popular stuff, from Lloyd Price's Personality onwards. To me, classical music was like green vegetables: you know you should be eating them, but you tend to gravitate towards the meat and desserts.

But when I actually heard pieces like Mozart's Flute and Harp Concerto or Boyce symphonies, I loved them. I would say to Joan, I love this record and she would reply, The music's good, too. And it was Joan's Mum and Dad who introduced us both to The King's Singers. They had the terrific Out Of The Blue record, which is now out of print, like too many of this six voice male vocal group's recordings.


table of contents
Posted by David McKay at 11:33 pm