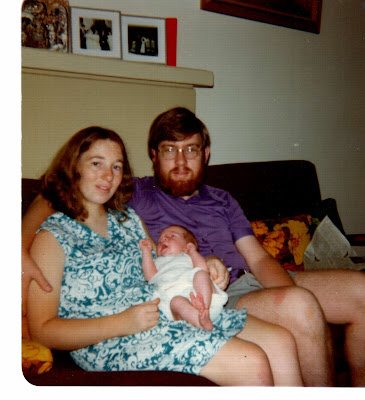 In about March, 1974 we discovered we were infanticipating. It was a pretty busy year, because I was in my last year of studies, at what by now was being called Newcastle College of Advanced Education. The name Teachers' College was so passé!

After I was awarded my A Mus A (Associate Diploma of Music, through the Australian Music Examinations Board), I changed piano teachers and began learning from Joan's teacher, Neta Maughan. Miss Maughan was much more like Christine Keeler than Eileen Keeley ever was: she was young, and pretty and used to travel to Newcastle to teach at the Con, one day per week.

I'm grateful for all four of my teachers - especially for my lovely, live-in teacher! When we discovered that we had a baby on the way, I didn't think I could do the last year of college, act as Newcastle Youth for Christ director and also do my L Mus A (licentiate), which Joan and Miss Maughan were encouraging me to do. And it was also pretty expensive. Miss Maughan kindly said she would pay half my fee. I love a bargain - so that clinched the deal!

I'm so pleased that I was pushed to undertake the project and very gratified that I managed to pass. I played some wonderful pieces: César Franck's amazing Prelude, Chorale and Fugue, Haydn's Sonata in E Flat Major, Hob XVI:52 ,Schumann's In der Nacht and Mátyás Seiber's Scherzando Capriccioso.

But the excitement of getting my L Mus A was nothing compared with becoming a father. We were excited when my sister Robin's first baby, Jonathan was born on 13th August, 1971. She used to bring him in to my bedroom for a cuddle in the mornings.  Then my sister Margaret and her husband Kevin had Jamie, on 5th May, 1973.

Another baby came on the scene when Joan's sister Kay (her only sibling)  and her husband Richard had their first child on 31st October, 1973, which was the first grandchild for Joan's parents, Llew and Nesta Sims. Jenny was there at our wedding, but Richard wasn't going to let anyone near her. But he did soften fairly soon after that. 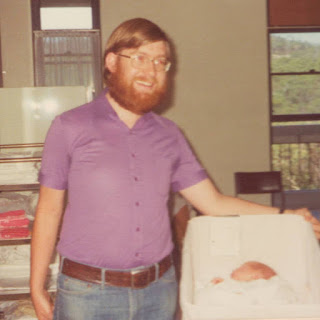 Our own first child, Daniel was born on 6th December, 1974. In those days, fathers were not allowed into the delivery room, and especially not when the mother is having a Caesarean operation. And Belmont hospital wouldn't allow fathers anywhere near their children at all!

But Joan's Dad had a cunning plan: he asked if he could take a photo of me with my new son. Thanks Dad!


I was really impatient to hold my own little boy, and was staggered that I was not even allowed to carry him to our car. This had to be done by the nurse! I was so cross, I left Joan with the nurse in one lift, and went down fuming in another, meeting them at the ground floor! 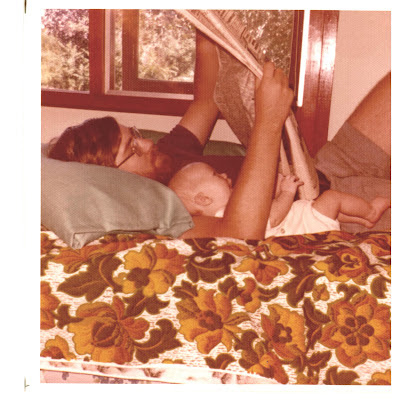 I did try to teach Daniel good habits, as you can see in the photo, but I'm sorry to say that today he buys The Age newspaper to read the sport pages! 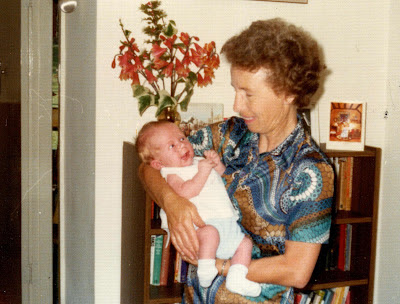 The grandparents adored our baby boy, as you can see from this lovely photo of Joan's mother, Nesta with her second grandchild.


table of contents
Posted by David McKay at 12:18 am