PAGE THIRTY-THREE: the B haitch P 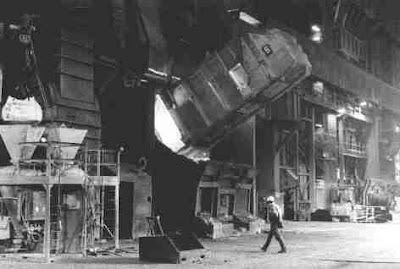 If you say haitch, shame on you! Does it ever grate on me! But so many Aussies say it. Haitch M V. The Haitch S C. The B Haitch P. Mum always told us it was spelt A-I-T-C-H, which was a guide to how it should be pronounced.

When I finished school, I went to work at the BHP (Newcastle Steelworks). In 1970-71, it was said they would give any boy who finished school a job there, if he asked for one. I think that was the only way I obtained a position, because I was a most unpromising labourer.

I was sent to the blacksmiths shop, where we were given salt tablets, to help us cope with the heat, and to encourage us to drink to replenish our energy. It certainly was hot in there.

I had very little to do: they mainly wanted me to keep the floor swept. For most of the long day, I was standing around. It was very boring. But if you sat down, and someone saw the shape of a chair on the back of your clothes, they would give you a sharp smack and call you a chair arse.

The men were very coarse. Lunch was supplied, but I found it hard to eat something that the men called Frank Farts. I lost my appetite at the thought of it!

One of the workers was called The Professor, because he was a bit of a know-it-all and had gone to Teachers' College for a term.

I felt like a fish out of water, but I did manage to keep it up for the three months between finishing school and starting at Newcastle Conservatorium and Teachers' College, and managed to earn enough to buy a car. My first car was a 1958 Morris 1000 panel van.  It had been used by the NRMA man from Griffiths Garage and had no passenger's seat, but a big box over a large battery, used for jump-starting cars.

The NRMA removed their distinctive blue colour and logo and painted the car white. It cost us $300. I think I paid $200 and Mum and Dad paid the rest. Dad chose the car, partly based on the fact that he understood Morris engines and would be able to work on it.

One of the first times I went out in it, was to go to the Wallacia Pop Festival with Susan Rawling and a few others. We were only just out of Swansea when my car conked out. We were going to the place to do some evangelism, and went equipped with a tape recorder to use to interview people.

Then, as now, Christians had some odd ideas about the way God guides us. I thought God was telling me something when the car stopped going. Did he want us to turn round and go back home? One of the folk found out that the fuel line was dirty, and sucked on it (yuck) which got rid of the blockage, and we were off again. 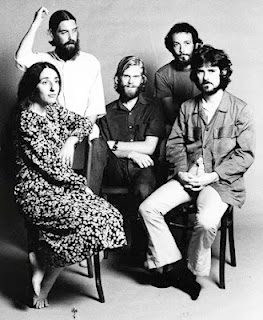 We heard the band Tully perform and heard Adrian Rawlins laugh a lot. Tully were devotees of Meher Baba.
It was interesting chatting with festival-goers, but also frustrating. Paul's words in 2 Corinthians 4:4 spring to mind:


The god of this age has blinded the minds of unbelievers, so that they cannot see the light of the gospel that displays the glory of Christ, who is the image of God.


During those days straight after completing high school, I bought a guitar. It was made in China and was not like the terrific items that come from that great country today. It cost me $15 and had steel strings, which cut my fingers. It was very poorly made. 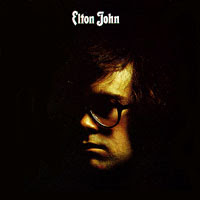 And, I bought a copy of Elton John's self-titled album. I still love it. It is an intriguing collection of songs, brilliantly performed and arranged.

table of contents
Posted by David McKay at 11:27 pm