PAGE FORTY: two weddings, a gig and a funeral 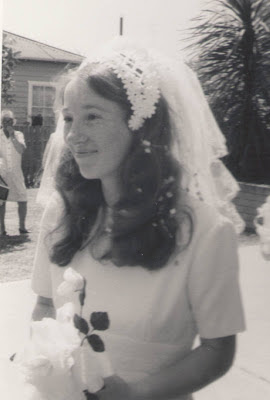 This is a photo of the world's most beautiful bride, in the wedding dress which she made herself. I think Joan has the most lovely face and such a winning smile. She also looked pretty good in a certain purple bikini.

We got married at Belmont Baptist Church on Saturday, 24th November, 1973 at 1.30 PM It was a warm day: rather hot to be dressed up in a suit, as you do. Joan's schoolfriend, Susan Ridley was bridesmaid, and Joan's sister Kay was matron of honour. My best man was my best friend, Paul Stocks. Our minister, Albin Betterridge, conducted our wedding.

Susan Rawling's group Maranatha sang Susan's song The Marriage Supper of the Lamb, based on Revelation chapter 19. We had wanted to have The Lord's My Shepherd as our wedding hymn, but were told we couldn't, because people sing it at funerals! I even got a complaint this year when I included it in our church service from someone who had heard it at her grandfather's funeral, a few weeks before.

I think it is a great hymn to sing on any occasion. But, when we were told that it was perfectly acceptable to sing The King of Love My Shepherd Is, we went with that one, which is also based on the grand words of Psalm 23, which I had memorised in Sunday School.(Ironically, it was the latter hymn which was sung at Princess Diana's funeral.)

Our reception was held at 23 Colarado St, Adamstown Heights, Joan's home. It was a small, two bedroom house, but somehow we managed to fit in our fifty guests. 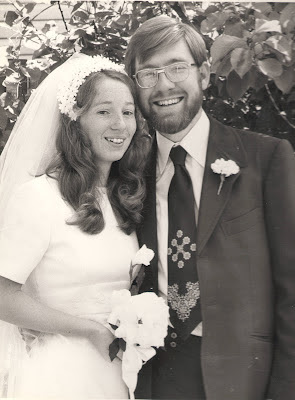 Joan's Dad kindly locked my car in the garage, so we didn't have to endure the hijinks of people tying things to it. Weren't we party-poopers?

When we arrived at Shoal Bay for our honeymoon, we couldn't find any sheets for the bed in the flat we were staying in. So we spent a quite uncomfortable very first time in a bed together between rather prickly blankets.

The next morning, I went to see the landlady to get some sheets, explaining that we couldn't find any, so that my fiancée and I had to sleep under blankets.
Now I'm guessing you didn't blink when you read that, but I was horrified when I heard myself say it, because Joan was no longer my fiancée, but my wife. I guess I was thinking similar thoughts to my mother's, in India, back in 1952. I wonder if there is anyone left who would think like that in 2012?

When we got married, I had just turned twenty-one, and Joan was twenty. What would you think of me if I told you that I spent quite a bit of our honeymoon in tears? I was not regretting being married to Joan, but was feeling rather overwhelmed by my new responsibilities. Unlike Joan, I had lived at home for the whole of my life: Joan had at least experienced life away from home in the eleven months at Bible college.

I don't think we planned our honeymoon particularly well, because we were offered a gig at Coffs Harbour Methodist Church, and we accepted it, although it was to be during our honeymoon! We enjoyed the drive up the Pacific Highway, and our Morris Mini Deluxe behaved itself and didn't boil over once.

The weather was delightful, as was the company, and I remember when we drove over some bridges Joan looking into the water and exclaiming Lovely river!

Joan and I only had about three or four gigs, with me playing guitar, Joan the flute, and singing a few songs together. Don't tell anybody this, but no-one ever asked us back! We had one memorable gig at Dungog BYF (Baptist Youth Fellowship). The compere introduced us by saying, in all seriousness, that they had asked two other performers, who both declined coming, so they ended up asking us as a third choice, and we accepted.

I couldn't resist retorting that we were just there rehearsing for our gig at Newcastle YFC the following week!

The day after our performance in Coffs Harbour, the minister of the church called around to tell us that Uncle Ben had passed away. Ben Broadhead had sponsored Joan's family coming out to Australia, and they had lived with him in Mayfield West for a few years, before moving into their own home in Adamstown Heights. We had intended to stay with him for a short time, until we found ourselves a flat.

We drove back to Newcastle and attended his funeral, and also our friends Paul and Lee's wedding. Lee was in Maranatha and had sung at our wedding the week before. Maybe we should have another honeymoon to make up for the one that was so full of other things: what do you think? 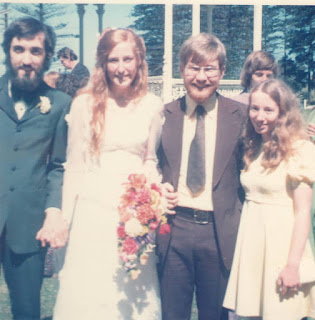 table of contents
Posted by David McKay at 10:23 pm