Joan's mother and father, Nesta and Llew, were kind and welcoming to me. Mr Sims was a newspaper man. He was chief subeditor on the Newcastle Morning Herald and a most interesting man. He gave good advice, but mostly waited to be asked. 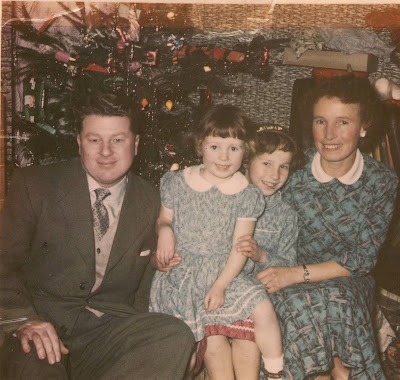 I like this photo of them with their two girls, Joan and Kay, taken in England, before they came to Australia as Ten Pound Poms in December, 1963.

I had been brought up as a Baptist and teetotaller, and had been led to believe that all people who drank alcohol were raging drunks. Mum and Dad didn't teach us that, but we certainly got that impression from Sunday School and church.

When Nesta offered me a Christmas sherry, I wasn't sure what I'd get myself into if I accepted it.

But, as I transpired, I thought it had the most revolting taste: whatever did people see in it? I still don't like sherry, but have learnt to enjoy other drinks. Joan's folks were very moderate drinkers. I remember Llew used to enjoy a drop of Ben Ean moselle or, what he used to call rough red, by which he meant cheap red wine (I think).

When I got my second car, which was a 1967 maroon Morris Mini Deluxe, it wasn't long before the brakes needed fixing. I took the car to a firm called Better Brakes and the mechanic said:

That was a fortune to me: my Teacher's Scholarship was $28 per fornight! Llew gave me some very sensible advice. He told me to get a second opinion from Delore Motors, which was a Morris specialist. After looking at my car, the mechanic said:


Bad news, mate: it's going to be expensive. I think it will be about fifty bucks.

I was amazed at the difference in the two quotes. Guess which one I went with? But I was also pleasantly surprised when I went back to collect the mighty Min. The mechanic smiled and said:


You're in luck. Not as bad as we thought. Thirty-three dollars

Someone later explained to me that the brakes place made their money out of the parts they sold, and probably replaced parts that the other place didn't think needed to be taken out. 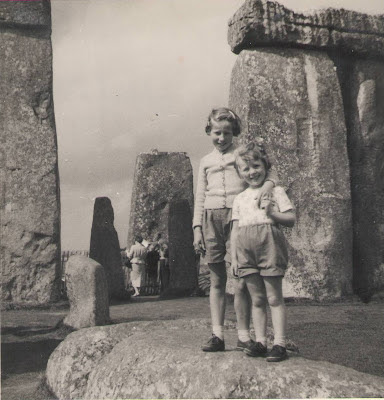 While I'm ferreting around in old family photos, I can't resist including this terrific one of Kay and Joan at Stonehenge in about 1958, in the days when the public were allowed in. Kay is five years older than Joan, and is a fellow music teacher. She was in fourth year at Newcastle Teacher's College and Conservatorium when I was in first year.

One very helpful thing Kay did for me, in my second year of Teachers' College, was to invite me to come to Glendale High School and teach a small guitar class. I could hardly play myself! But it was a good experience to be put in charge of a few students, before being thrown into the deep end in a classroom of thirty kids!

Talk about Qui docet, discit! (That's the motto of the NSW Teachers' Federation and means "the one who teaches, learns." These days they have put it into more contemporary English and render it as "It's amazing what you learn when you teach.")

I had a painful learning experience one week, when a girl called Narelle brought in her nylon string, acoustic guitar and asked me to restring it. She handed me some steel strings and I had no idea that they shouldn't be put on her guitar.

Bang! The bridge broke right off and her cheap nylon string guitar was ruined. My father used to say "You'll never learn younger."


table of contents
Posted by David McKay at 10:57 pm