PAGE THIRTY-EIGHT: from girlfriend to fiancée

I loved having a girlfriend who did cartwheels, played the flute and piano beautifully and who was such fun to be with. Joan was doing the second year of the performer's DSCM (Diploma of the Sydney Conservatorium of Music), when she was in sixth form, while I was in first year Dip Mus Ed at Newcastle Conservatorium and Teacher's College.

We were excited to discover that we both had to attend the same Acoustics class. I can't say I remember a lot about Acoustics, though I do remember Eric Aubert, taking out a tuning hammer and demonstrating how a piano is tuned. I also remember who I sat next to for each lesson.

The next year, our choir conductor, Michael Dudman, noticing that Joan and I seemed to enjoy being together, asked us if we would arrange the orchestral reduction in the Bach Mass in B Minor vocal score to be played by two pianos. We only had to do a little reorganisation, and were soon happily practising the Gloria section, which was the first part the choir was going to perform.

I also loved the way that Joan expressed her new-found Christian faith by making posters and putting them up on the walls in her home. I can't help thinking of this when I read some of these passages in the Bible. One of these came to mind last week, when Pastor Mark Sutton was preaching from Peter's first Letter:


Humble yourselves therefore,
under the mighty hand of God
that he may exalt you in due time.
Casting all your care on him,
for he careth for you.

And I also remember the verse that Joan put on a poster in the kitchen in her Colarado St home:


Whether you eat or drink
or whatever you do
do it all to the glory of God.

In the second half of 1972, I was accepted to be part of a Youth For Christ team travelling to Singapore, Sri Lanka, India, Bangla Desh and Nepal, in January, 1973. The plan was that we would meet at the YFC Gold Coast camp and rehearse for a couple of weeks, before leaving for India, with Eric Leach, who was to be the speaker.

I thought I was going along to play the piano, but there were three pianists in the team, and my friend Mary Patty was chosen as the pianist. My role was to sing. Now, although I had sung in school choral groups and choirs, I had never sung professionally and have not been favoured with much of a voice, though I can sing in tune and hold a part.

They did allow the three pianists to play a piano trio arrangement of Ralph Carmichael's song, He's Everything To Me, which we enjoyed doing. But it wasn't easy for me to play a piano that was a semitone sharp, in one of the towns we visited briefly. My acute sense of pitch made this an excruciating experience, because when I played a chord that looked and felt like B major, it would come out sounding like a C. Very off-putting.

From the time that Joan and I began spending time together, I couldn't imagine ever splitting up, or wanting to be with anybody else. But I was only nineteen, Mum would remind me. However, after I was accepted for the team travelling to India, Mum told me that this might be a good time to give Joan some security by announcing my intentions. I proposed to her the next day, 19th December, 1972.

Don't laugh, but I asked her if she'd like to be a minister's wife, and she replied that it all depended who the minister was. This photo was taken just after we got engaged. 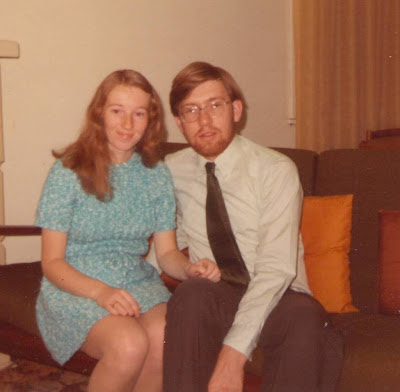 Communication was very different back in 1973 when I was in India. I was unable to ring Joan, and relied on getting a letter from her and sending letters to her. I missed her tremendously, though I look happy enough in this photo taken in India. (I've got the archetypical one at the Taj Mahal somewhere, but can't put my hands on it, at the moment.) In the photo, I'm wearing an Indian shirt and a very uncomfortable coat made of yak hairs. 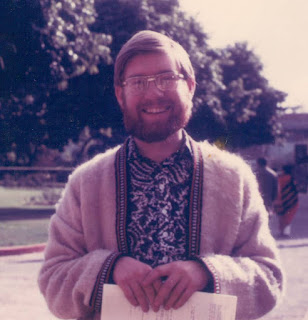 The jokes about our Australian accent are true: other people really do hear us quite differently from how we hear ourselves.So when I bowled up to an Indian man called Nicanor, hoping he had a letter from Joan for me, I asked "Any mail?" and he replied. "No. We only have kilometres in India!"

Then he told me a favourite Indian joke: an Australian doctor, working in India asks a hospital patient


Did you come here to today?

and the patient replies

and runs out of the room.

It was an eye opener seeing the huge differences in the lifestyles of people in India and neighbouring countries. It was also odd, seeing how differently some of the missionaries' lives were from the people they were serving. A Canadian Lutheran family in a southern Indian town had maple syrup flown in, but I was grateful they had Western toilets. I couldn't come to terms with the holes in the ground in other parts of India that we were sent to, when nature called, nor the long periods of travelling time where there were no toilets available at all.

It was in India where I heard this parody on We Three Kings of Orient, Are. Back in 1973, Indians were as mad about the Beatles as the rest of the world had been in 1964.

When I arrived back in Australia, I was so pleased to see Joan again. I knew that I never wanted another period of five whole weeks away from her.

table of contents
Posted by David McKay at 1:14 am