We were pretty strait-laced in Belmont Baptist Church, as the photo of our Sunday School teachers reveals. The men wore suits and the ladies always wore hats. And of course we were not alone in this.

When David Aiton became a Christian and came to stay at our place (sharing my tiny bedroom with me), he discovered that he needed to buy a suit to be accepted as being dressed for church. That was a tall order for an apprentice fitter and machinist. After he got one, a deacon informed him that he could join the communion servers' roster, now that he was properly dressed.

I fell foul of these dress rules myself when I wore shorts and a short-sleeved shirt and no tie, while playing the Hammond organ in church on a hot summer morning. The choirmaster objected and I was told I must dress formally when I played the organ. Interestingly, Mr Thrum himself was breaking the code, too, because he was a smoker! (In those days, we were told that the verse in 1 Corinthians about our bodies being a temple of the Holy Spirit, was put there to prohibit Christians from puffing on cigarettes.)

There were all kinds of rules that we were expected to follow. Baptists didn't dance, smoke, drink alcohol, play sport on The Lord's Day, or even go swimming or picnicking. Everything was going swimmingly until the Livingstones put in a pool.

Arch and Gloria Livingstone had a poultry farm, which was called Ringal, based on their names, from youngest to oldest: 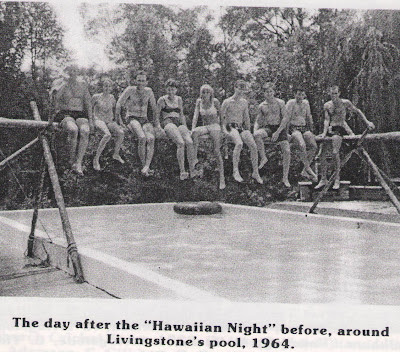 I think the Livingstones were the first to own a pool. Now it is one thing to not go to the local pool on a hot Sunday, but quite another to refrain from having a dip in your own pool. So Ian asked Mr Betterridge to clarify something:

One Sunday afternoon, David Aiton and I went to Wallsend Baptist Church to hear the Rev Rowland Croucher speak. He mercilessly lampooned some of our most treasured rules. I remember him engaging in a similar piece of logic to Ian's to point out how crazy it was that we were taught that it was fine to go for a walk on the Sabbath (which people equated with Sunday and the Lord's Day) and fine to eat, but doing both together ( picnicking) was verboten.

Yet another rule was that women should not wear men's clothing, nor men women's, and especially not in church. And so our new music group was faced with a problem.

We had a group uniform, which consisted of  a brightly covered top, which we wore over our slacks. It was perfectly acceptable at Katoomba Youth For Christ on Saturday night. But we were warned that this would not be accepted at the church where we would be singing on the following Sunday morning. (It was either Leura or Lawson Baptist Church: I can't remember which.)

We did not have an alternative change of clothing, so what were we to do? I didn't expect what came next: the girls turned up without their trousers! If the conservative church folk didn't like girls wearing slacks, fine. Just take 'em off!


And, believe it or not, going bottomless, or if you like, wearing micro-minis, was more acceptable than girls in modest slacks.

My mother had an expression which she got from her mother: the sights you see when you're out without your gun!

table of contents
Posted by David McKay at 9:53 pm

Hm sort of was like that a bit as I grew up as well, so glad it is gone now, I do wish you had an email subscription option on your blog