I never travel without my diary. One should always have something sensational to read in the train. Oscar Wilde

In 1964, my brothers and sisters and I gave Dad a five year diary for Christmas. You might have trouble finding one today: they seem to have gone out of fashion.

Dad wrote in it meticulously, right after he had had his evening Bible reading. He seemed to like writing in it, so five years later we gave him another, and kept doing this each time he'd filled the last one up.He wrote diary entries almost every day for nearly thirty years.

My brother Christopher has one of the diaries, and I have the other five. When we were children, we thought Dad's diary would be the world's tamest. If we had known the Oscar Wilde quote, we would have thought that anyone reading Dad's diary on the train would fall asleep and miss their stop! 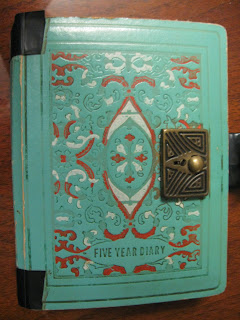 To us it seemed like all he wrote about was boring stuff. His first entry is pretty typical of most of the entries, which he began on 1st January, 1965:

At home. Cleaned under bonnet of car, went to Caves Beach with Mac and children. Friday.

Dad wrote  his last entry on Tuesday, 15th February, 1994. Mum took over the next day, beginning with

Dad mostly wrote about the weather, what he had done during the day, what he had growing in the garden, his state of health (but only if he was feeling "off" and unable to work) and always made a record of people he had written to or phoned.

But as we read them now, we find them interesting, partly because he reminds us of what happened in our family from 1965 to 1994, and partly because we enjoy it when he breaks his pattern and writes something personal, such as


Wednesday, 18th January, 1967
"Wm J McKell" 7 am-3 pm
Worked on second half of trellis
Note:- David is staying with a friend at Valentine, house quiet

What I find amazing in reading my Dad's diaries is how hard he worked, all painstakingly recorded from the age of 55 until he was 84, and no longer in good health.

He did not retire until the age of 65, but he did a huge amount of stuff at home, in addition to all the work for the NSW Dept of Public Works on various dredges, working as a marine engineer.

And every night he would sit down after dinner and read a few verses of his Bible and write his diary. At first I thought that he never missed, but have later discovered the odd entry written post facto, and sometimes crossed out and corrected because he had made a mistake about the particular day something had happened. But in the five diaries we have here, this is very rare.

The diaries also correct misapprehensions of mine, such as my incorrect memory of the day I was baptised. For years I have thought it was 13th February, 1966, and when I looked up that date could not understand why Dad, a good Baptist, did not refer to it. But in reading through, I found that I was in fact baptised on Sunday, 23rd January, but at least it was in 1966.


table of contents
Posted by David McKay at 11:05 pm