I was only nine years of age when I began attending Christian Endeavour sport days. I have always found sport to be incredibly daunting and also thoroughly boring.

Fortunately, I met the ten year old Paul Stocks at the first sports day our CE group attended, and we have been friends ever since. Paul's family attended Kotara Methodist Church. We did not participate in the goings on, but stood around talking and also eating food we had bought at the canteen.

When I was only a little older, I went off to a camp at Tahlee Bible College. I don't recall anyone else from Belmont attending, though I think my new friend went. At the camp, we met Philip Rawlings, from Charlestown Baptist. He was the same age as us, and was quite a character. One day Philip hid in an overhead cupboard during our Bible study time. We've never let him forget that.
I was a timid little boy and found some of the other boys to be quite scary. But there were a pair of twins there called Phillip and Paul Hall, from Boolaroo Presbyterian - their father was the minister. They were kind, fun and musical. They were great jokesters. They seemed to know them all. The twins were probably about fourteen or fifteen. They played  green Hohner harmonicas together and created a great sound.
I would love to catch up with them, but lost contact about forty years ago!

Phillip and Paul made sure I was safe and helped me find my glasses when I dropped them in the dark. (How do you find your glasses when you're blind as a bat without them?) They were also intelligent and articulate and had a living, Christian faith. They were great role models for a young lad to emulate.

I listened intently to camp leader, Godfrey Theobald's daughter Carolyn playing the piano, and learnt how to make a song sound groovy. I used to like her bass line in the song He's Able. By next camp, I had it down pat and was enjoying playing some of the songs and having people listen to me play. (Especially female people...)

The camps were cheap, but this meant that campers had to do chores such as peeling spuds, keeping toilets clean, etc. There seemed to be mountains of vegetables to wash and peel. I remember the Hall twins used to tell someone they liked that he was worth his weight in pumpkin skins.

There were long queues of hungry children, lined up waiting for their dinner. Michael Robinson and other Bible college staff and students used to regale us with shaggy dog stories while we waited. And waited.

Sometimes we were given a puzzle to solve. I still remember this one:


A man is looking at a picture on the wall, and makes this statement:


Brothers and sisters have I none,
But this man's father is my father's son.


Who is the man in the picture?


Mr Theobald was a kind gentleman, who was able to keep us under control without losing his rag. Not an easy task, says this former schoolteacher. He was a gifted speaker and used his artistic abilities to produce lightning sketches: pictures that were done very quickly and effectively as he told his stories.

If you asked him for his autograph (and many of us did) he would take the opportunity to draw something that left you with a gospel presentation to ponder. Here is what he put in my autograph book: 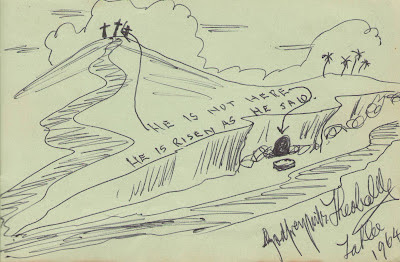 table of contents
Posted by David McKay at 10:36 pm

Great post about camp David! I also have attended camp at a Bible college and it was a great experience for me. Thank you for sharing your story with us!

Thanks, Kate. It's nice to have some readers.
And I love the folk who take the time to post a comment and let me know I have some!