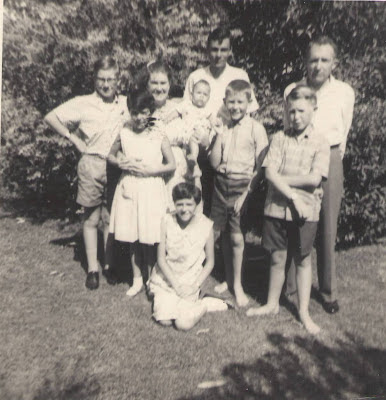 In June, 1964 Mum and Dad received a phone call from the NSW Department of Child Welfare, asking if they still wanted to foster a baby girl. Mum was 46 and Dad, 55. They said Yes and three weeks later, I had a new baby sister. My parents were able to name her, and called their new baby, born on 29th June, Sheena Joy McKay, because, said Mum, a new baby brings joy.

I had had a little experience bottle-feeding Heather Rongong, daughter of Mum's fellow missionary Joy Rongong and her husband Ganu, and enjoyed sitting on the front verandah and giving Sheena her bottle.

In the photo above you can see George (Mac) Smith and Dad in the back row, myself, Mum, Sheena, Christopher and Malcolm in the second row, with Robin standing and Margaret sitting, in the front.

Our family was considered to be a big one, but in those days, a family with four children was thought quite normal and not large. My schoolfriend, Chris Young, had five sisters, and maybe one brother; can't be sure. Mr and Mrs McCloy next door to us, had eight children, and their son next door to them had eleven. I think our neighbours on the other side, Charlie and Joan Gunning, had seven children: Angela, Julie, Charlie, Michael, Maria, Cindy and Tony. 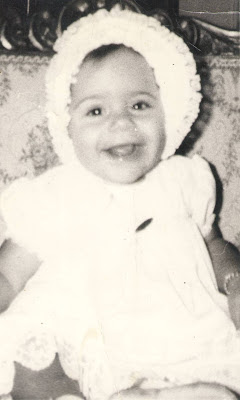 It was great fun having a baby sister. When Sheena got a little older, I tried to teach her the piano. It is not easy teaching your own family member, and I gave up pretty soon. Sheena was quite quick at working out things on the piano, but I was not a very good teacher.

I can't remember where Sheena slept, after she was no longer a baby. I know she had a white bassinette in Mum and Dad's bedroom, at first. I guess she must have joined the girls in their bedroom. I remember moving from the boys' room to the front verandah, when I got a little older, and recall having a mosquito net, to deal with the mozzies. Later, after our various house guests left, I inherited the guest room, which was off the dining room and close to the piano.

table of contents
Posted by David McKay at 10:25 am