PAGE TWENTY-ONE: music in our house

They say nostalgia isn't what it used to be. There are certain pieces of music that remind me of people and places. But they may not be as memorable to them as they are to me!

When I think of my brother Christopher, I remember playing this movement from Bach's Cantata BWV 140 together: I played piano, while he played the lower part on bass guitar. I've still got the music we used ... somewhere. Christopher used to call it Watch it, oaf!

I hope you enjoy this pleasant performance by Steve Howe and friends. I never knew that he was venturing beyond Prog Rock until I hunted for a nice video to share.

I can remember each of my brothers and sisters singing, but Malcolm was the one with the best voice. He followed me to the Newcastle Conservatorium and learnt from the best singer there, I thought. I always loved hearing William Coombes sing: he sounded so natural. Malcolm used to sound great singing Purcell's Man is for the woman made. He has a baritone voice. All of the recordings I can find are sung by tenors or countertenors. But I think Paul Agnew does it justice. 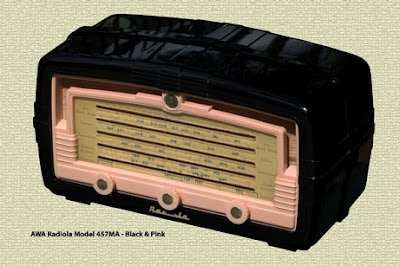 We had a bakelite radio which looked a little like this one, but it was cream, not black and pink. We heard so much great music on that modest AM radio.

The first piece of popular music that arrested me was Lloyd Price singing Personality. I think Mum was bemused by how much it captivated me. I first heard it in about 1959 and it still gets my heart racing.

I often think of Robin singing the hook of Hello, Hello: who's your lady friend? but I don't know where she got it from. It is a very old piece of music, Youtube reveals.

Margaret used to enjoy listening to the old radio, and I remember her singing along to Dinah Lee's version of Don't You Know, Yockomo?

But although Christopher, Malcolm, Robin and Margaret may have forgotten these pieces of music which I associate with them, I'm confident that Sheena remembers this song, though she was a fan a bit later than when she was photographed with her brothers and sisters for the picture I've headed this page with.

Sheena loved Suzi Quatro, and I think she still does. And what is more quintessentially Suzi Q than Devilgate Drive?

table of contents
Posted by David McKay at 9:55 am