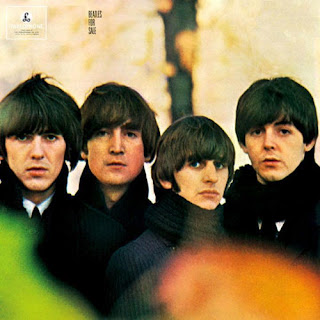 Lots of things happened in my first year of high school. I remember attending Debbie Wilson's thirteenth birthday party, and being captivated by the music emanating from a little portable record player.

I especially remember hearing The Beatles' Things We Said Today. There's something arresting about the song: I still love John Lennon's acoustic guitar rhythms, Paul McCartney's voice, the vocal harmony, the nostalgic words and the changes from minor to major modality. Magic!

The album cover is for Beatles For Sale, which I first heard at my friend Paul's place in Grinsell St, Kotara. I thought it was terrific, but I understand that many people think it is one of The Beatles' weakest albums, including George Martin, the group's producer.

Debbie's birthday was 10th August, coincidentally the same day as Les Milne's. When mine came along, on 16th October, Mum arranged a super party. She very naughtily paired us up and put me in a pair with Judy Hudson. I bet she doesn't remember that. She even organised a game of Spin The Bottle, in which you are supposed to kiss the person the bottle points to when it stops spinning.

For my birthday, I was given a copy of Living Letters, Ken Taylor's paraphrase of the New Testament letters,  in 1960s American English. He did not translate from the Greek, but simply reworded the American Standard Version (which was a revision of the 1769 edition of the King James Version).

I found it made the Bible sound like it was written yesterday, and understood the message in a new way. I later learnt that it wasn't very accurate and reflected Taylor's own theology. However, it brought out some uncomfortable aspects of what the Bible says, and I remember complaining to my mother about Romans chapter 9. Mum told me that you can't get away from predestination: it is in the Bible, as is the Bible's invitation to all to come to Christ!


Who does God think he is! I fumed.
He thinks he's God, said Mum

(That's not ipsissima verba, but that's the text of it.)

The same year I also read Norman Vincent Peale's The Power of Positive Thinking. My friend Ken Trevillien's mother told me that Dr Peale was a bit too full of himself. Looking back on the author of Romans and most of the other New Testament letters, I think there's a richness in his writings, but a superficiality and shallowness in the positive thinking teaching. So I agree with Adlai Stevenson who said

A few years later, my brother Malcolm gave me a copy of The Living Bible, which I still have. I think there's a lot of good in it, but appreciate the more scholarly New Living Translation, which has been carefully translated from the original Hebrew, Aramaic and Greek, by recognised by Bible exegetes, turning Taylor's paraphrase into a reliable translation of the living Word of God.

table of contents
Posted by David McKay at 3:54 pm