Moving from our old school on the hill to our decagon in Livingstone St was like emerging from the dark ages into the renaissance. But historically this happened gradually, whereas for us it was instantaneous.

At our old school, we had dark classrooms and old, old desks with inkwells in them. We were not allowed to use those new-fangled biros. I always hated the inkpens. I made a mess trying to write, partly because as a left-hander, my hand would smudge the page as it moved across. I tried using a blotter, but I still managed to muck it up.

We had to use old-fashioned cursive script, with all the loops, which should have looked something like this: 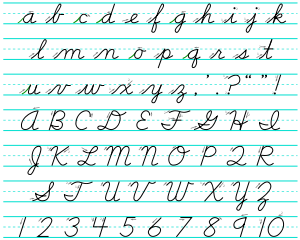 Mine never did! I used to get good marks for Arithmetic, which, for some reason, was always out of 200, and for the other subjects, which were all out of 100. I enjoyed most subjects, but endured sport and other physical high jinks. My marks for Writing were nearly always 60/100.

Fifth class was particularly a trial. I copped Mr Sheehan again, having had him as my teacher in third class. It was fairly boring, because he used the same songs and stories as we'd had the first time round. I think the arithmetic, spelling and social studies were different.

But I enjoyed sitting next to Ian Nickalls. He was a nice-natured kid and used to tease me about my pale skin. He called me brown legs. Ian introduced me to the Top 40. He used to bring hit parade charts to school. He used to enjoy Gerry and the Pacemakers singing I Like It and How Do You Do It?

One day the teacher asked us what we would like to do when we left school. I'm not sure Ian quite understood the question, because when it was his turn, he said

Funny the things you remember. (But I often find the person in the tale has completely forgotten the main thing you remember them by.)

But, in 1964, we moved to a brand new ten-sided school, with new classrooms, new desks, new biros, modified cursive, without all those confounded loops and ... girls. I may have been only eleven at the beginning of 1964, but I thought girls were not the kind of creatures you would choose to be separated from!

When we were told we were going to have a new school with the girls, there were whispers about a new girl called Helen Scott. I think she was new to the girls school and was beating everyone else there. My friend, Glen Davies and I were intrigued and were looking forward to meeting her. We were informed that she was blonde and very bright.

My last year of primary school was very enjoyable. We had a wonderful teacher that year. His name was Les Milne. He was a warm, kindly man who treated us with courtesy. I enjoyed his readings from The Hobbit immensely.

Towards the end of the year, my friend Leonard and I were invited to do a tour of the classrooms playing our two party pieces (both Beatles songs, of course): If I Fell and I Should Have Known Better. Leonard played his steel string guitar and I played my 48 bass piano accordion.


Here is a photo of our brand new school. Notice the lovely creatures in front:

table of contents
Posted by David McKay at 9:08 pm