PAGE FOUR: a girl with a piano 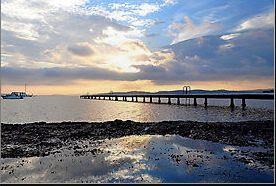 My father used to love quoting Thomas à Kempis' observation in his book, The Imitation of Christ,

I think Dad meant that you can make your plans, but things may not turn out in quite the way you thought they would.

After finding himself working in Newcastle for a couple of years, while we lived in the Sydney suburb of Russell Lea, he bought a house in the Lake Macquarie area so that we were living close to where he worked. It was 46 Macquarie St, Belmont. And he paid cash for it.

Very shortly after we moved, Dad was transferred to Port Kembla!

I soon discovered that there was a girl called Dianne living a few doors up the street. And she had a piano! I loved going to her house and tinkering on it. Dianne told me she could play God Save The Queen and proceeded to demonstrate, but it didn't sound quite right to me! Sometimes she could get as far as

where it started to sound wrong. Then she'd start again and only get to

I don't remember her ever starting on C and thus being able to complete the whole song on the white keys. At that time, I didn't have a clue about those mysterious black keys, and so couldn't have solved the problem myself ... but I knew there was one.

table of contents
Posted by David McKay at 10:31 am