What is energy? Energy is work being done said Mrs Regan, as she walked up and down at the front of her new first form Science class at Belmont High School. Now I knew a little about Nature Study, having watched a butterfly emerge from a chrysalis, but what on earth was my new teacher on about? It was totally bizarre to me.

A few days later, while Mrs Regan was speaking, a little grey-haired man, with granny glasses and dressed in a white lab coat crawled across the floor of our classroom and silently opened a cupboard to get something. I later discovered he was Ben Hall, the Science master. (The kids always called him "Ben," in honour of the famous bushranger.) Strange goings on!

We were also expected to jump over a long box called a vaulting horse. I could never figure out how you were expected to accomplish this. One day one of the boys landed on the horse and broke his arm, with it dangling dangerously from between his elbow and his hand after the event. Ouch!

English lessons with Miss Norma Fitzpatrick were very enjoyable. She got us to see how many books we could read in a year. I hit on the idea of reading short stories to improve my bottom line. I did manage to read George Orwell's Nineteen Eighty Four, which was quite challenging for a twelve year old, but also joined my brother Christopher in attempting to read through all the science fiction short story books in the Belmont Library. I enjoyed reading stories like  Daniel Keyes' Flowers For Algernon. I think this was the first time that I made a list of achievements. I think I read through 150 books, but most of these were short stories.

We kept losing our Social Studies teachers. Careless, weren't we! Mrs Poetschka left after first term to have a baby; then Mrs Murray also went away for the same reason. When Mr Cornelius arrived in the third term, we thought he'd have to find a different excuse.

But the highlight of junior high school for me, was having proper Music teachers. In those days, most schools had choirs and choral groups, but only a few had bands. But since the 1980s, this seems to have been reversed. This 1966 photo is of the Boys Choir: there was also a much larger Girls Choir. 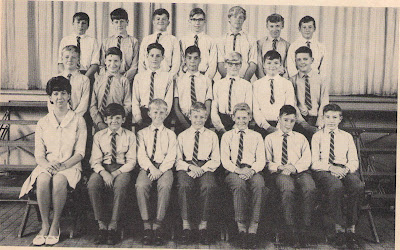 The choir mistress is Miss Helen Batty. Miss Cross, who was an Art teacher, also taught a few Music lessons. The kids used to say


Miss Cross is batty and Miss Batty is cross.

I think Miss Batty was pretty good at acting cross, to keep us in line. I'm not sure that Miss Cross was in any way crazy.
We had some great Music teachers. I knew so little about Music, before coming to high school. I had played a few piano pieces, and had heard some songs on the radio, but knew almost no classical music. Our family had a few Broadway musicals, such as The Student Prince, Oklahoma! and Brigadoon and lots of gospel music, but the only classical record we had for a long time was a collection of Strauss waltzes.

I eagerly lapped up the music played for us in class and loved Elective Music classes in which we learnt to follow the score in those great blue, green and orange Fiske score reading books. (We never had the maroon choral one.)

I also loved being in the school choral group. We sang some beautiful music, including Bach's chorale from  St Matthew Passion, but we didn't sing it in German, nor the familiar English words O sacred head, now wounded. We sang these lovely words:


Commit thy way to Jesus,
Thy burdens and thy cares;
He from them all releases,
He all thy sorrow shares.
He gives the winds their courses,
And bounds the ocean's shore,
He suffers not temptation
To rise beyond thy power.

I think they were just words to sing, for many. But I sang them as an expression of my faith in Christ.

Quantum potero? That was the school motto, which we were told means Strive your best. I'm pleased to see that Belmont High School still refers to this old motto, though now the school describes its purpose as


table of contents
Posted by David McKay at 11:42 pm