next page
This is a book about me. It has sixty pages, for reasons that will become obvious later in the story.
If you like it, I might write another one. I'm posting it here over the next sixty days. One day I might turn it into a real book.

How it all started
In 1951, a man called Stan asked a woman called Betty if she wouldn't mind taking a suitcase through customs for him. And that's how my parents met.
But most people, including Mum, called Dad "Scot" and Dad never called Mum "Betty." When she told him her name was Beatrice, he shortened it, with permission, to "Bea."

The suitcase was full of ladies' underwear. Dad wasn't kinky, and he didn't want Customs to think he was kinky. He was taking the very respectable lingerie to his sister, who was also called Beatrice, a nurse with The Leprosy Mission in South India. But nobody called my Aunty "Beatrice." She was always known as "Trixie."

Nine days later, Dad asked Mum if there was any reason why he couldn't ask her to marry him, and Mum said she couldn't think of any. 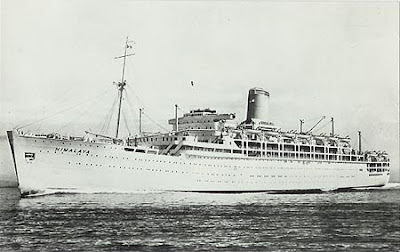 They married when they got to India, on 9th January, 1952, where Mum had been a housemother in St Andrews Colonial Homes, Kalimpong for the previous twelve years. She had been intending to begin her fourth term there, but after meeting Dad, changed her mind and they travelled back to Australia on the same ship, The S.S. Himalaya.

My life began soon afterwards, but definitely after the wedding. In fact Mum sent the servant boy to bring her their wedding certificate, which had been left with the minister, before she would spend the night with her new husband. When I was born, I weighed only four pounds, and was a few weeks premature, so I guess my life began on board the Himalaya, en route to Australia, because my birthday is 16th October.

table of contents
Posted by David McKay at 1:58 pm