PAGE TEN: the best house in the world

We moved in the year I turned seven. Mum and Dad thought we were going to need more room, now that there were three boys and two girls in our family. Margaret was two weeks older than me, and Robin was five months younger than Malcolm and Christopher.

Dad was mortified that he had to take out a small overdraft of a few hundred pounds to purchase the property. He had paid cash for our first two houses.

It was a lovely big house, on a three-quarter acre property. It is a shame that we have so few pictures of it. The one above, taken on our side verandah, is of my mother Bea and her sister Peg, Nanna and her half-sister, Gladys, and my cousin Margaret. There was also an enclosed front verandah, which you can see in the photo of me with my twin brothers.

There was a bedroom for the boys, one for Mum and Dad, a bedroom for the girls and a guest room.
We had a lounge room and dining-room and a rumpus room behind the kitchen. There was a bathroom off a corridor between the girls' room and the boys' room and there was a shower in the laundry.
The kitchen had a fuel stove and an electric stove.
The house had been built by our neighbour, Mr McCloy, who lived with his wife Lila next door to his son, who had what seemed like quite a modest house, yet they managed to fit their eleven children in it, too.
While Mr McCloy built his house, his family of eight children lived with him and his wife in a shed at the back of the property.

There were two car garages and another room for storage.

Dad had plenty of room to grow veges and there was a mulberry tree and a drain that went through the property, enabling us children to play Pooh sticks which involved us throwing bits of wood under the bridge over the drain and watching them come through to the other side.
Mum was always inviting people to come and stay with us. They would usually stay in the guest room. My piano was on the guest room wall.
Our first guest was Nanna. She lived with us during the last six months of her life, dying in November, 1962, just after I turned ten. Mum and Dad bought our first television that year, and Margaret and Nanna used to enjoy watching the ballroom dancing together.
And we all enjoyed watching Victor Borge, the Danish comedian-musician, but especially enjoyed watching Nanna rolling with laughter at his very corny jokes. I used to like the one about Mr Plus One, who always had to add a number to everything he said. One day Mr Plus One turned up at a friend's house, dressed in white shirt, white shorts and white sandshoes and asked:
Any two five elevenis?

Nanna enjoyed the visits from our minister, Doug Turley. She liked his way of explaining that our relationship with God is not based on going to church, or on what we do, but on what Jesus has done in his life, death and resurrection. Mum had tried to tell her mother about the faith she had embraced at the age of eighteen, which led her to train at Sydney Missionary and Bible College and then spend twelve years as a housemother in Kalimpong, West Bengal. But she felt that Mr Turley had been the one to help Nanna to also share this joy.

I think Irene Johnson came to stay with us while Nanna was there. Irene came from Nelson Bay, but had got a job at Heddles' Shoe Store in Belmont, and so stayed with us during the week (and some weekends). Irene was a pretty young woman with auburn hair. She was a piano accordionist and taught me to play the instrument. One of her party pieces was called The Assurance March and I was thrilled to learn how to play it, because it included a bass run - easy to execute on the piano, but requiring some dexterity on the accordion.

In 1963, George Smith (also known as Mac) came to stay, having just arrived from London. George had been a greatly loved  boy whom Mum had cared for in India when she was a housemother.  He had been working for the textbook publishers, Longmans and Green. When he first arrived, he worked for Keith Cox as a brickie's labourer.
He was a great fan of Cliff Richard and I remember Lucky Lips emanating from the radio in his bedroom.
But it wasn't long before George got a job in Ringwood, Victoria working for Penguin Books. He gave us copies of some great books, including C S Lewis' The Magician's Nephew and Donald Horne's The Lucky Country.


Mum's habit of inviting people home is exemplified by the time we went ten pin bowling one Christmas Eve.  There was an American man at the bowling alley, all on his own. Mum invited him to come and play with us and asked him what he would be doing on Christmas Day. He said he would be spending it in his hotel room, and so Mum asked him to come to our place for Christmas lunch. we thought he said his name was Wolt Gauze, which sounded like an unusual name, even for an American, but it turned out that his name was Walter Gowers. 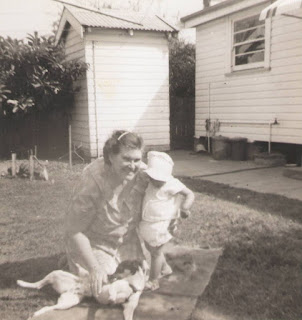 After lunch, Walt asked if he could use the bathroom. We duly directed him to the bathroom, but our bathroom did not have the actual facility he was needing. Although our house in York Crescent was the best house in the world, the toilet was outside the house. It seems strange to have a house with the toilet outside, but I did recently see one in Georges Plains, which is a few kilometres from Bathurst.

table of contents
Posted by David McKay at 11:02 pm