PAGE ELEVEN: the school on the hill 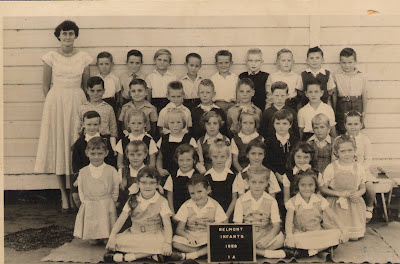 Belmont Infants School was quite enjoyable. Our teachers were all women and were mainly kind and friendly, though I found Mrs Cook, my teacher in second class to be a bit severe.

Mrs Sheehan, my teacher in first class, was a lovely natured person. I don't think you would find anyone who would have a bad word to say about her. I had an unpleasant encounter with her once, but it was all my own fault.

Someone told me to jump over a cliff, gave me some rope, and I stupidly jumped. Well, actually a certain little boy in the picture told me to write some rude words on the toilet wall and gave me some chalk. So I did! Can you guess what happened next? You got it! He went straight to Mrs Sheehan and told her that David McKay had written some rude words on the toilet wall.

I think she had the situation sussed pretty well, and she simply gave me a cloth to go and wipe off MRS BLOODY BUGGAR from the toilet wall. (I had thought that bugger would be spelt like beggar.)

When we were promoted to primary school, boys and girls were separated. I don't know about other primary schools in the 1960s, but I do know that most high schools were single sex. In fact, Belmont High School was the first coeducational state school in the Newcastle area. People were sure that the girls would get pregnant if you put boys and girls together.

I found Belmont Public School, from third to fifth class, to be a rather brutal place. The boys swore like troopers and were very rough with one another. And many of the teachers (all male) spent quite a lot of time caning little boys. It seems odd that the wives of the men could manage us in second class without whacking us continually, but the men didn't seem to be able to the following year.

I got the cane ten times in primary school: nine times for talking in class, and once because I moved during an assembly. I moved because a teacher pushed me, then reported me for moving! That's pretty close to my experience in first class, come to think of it. Except that the boy who gave me the chalk didn't actually force me to write the graffiti.

It amazes me that children were allowed to leave the playground and wander off to the shops to buy lunch, even though the school had its own tuckshop. I used to sit with Neville Chiplin at lunch time, and he would go to the fish and chip shop and buy himself two shillings worth of scollops and come back with quite a large greasy package to scoff. Neville and I are standing together in the top row of the photo: I'm the kid with the glasses, and Neville is on my right.

One day he told me a poem his father had taught him and I still remember it, after all these years:

As I recall, Neville and I spent a bit of time together at the boys' school on the hill, with the Moreton Bay fig tree roots breaking up the asphalt. I don't remember seeing him much after that.
But one day in the late 70s, after having not seen each other for about fifteen or sixteen years, a petrol station attendant in Milton, Queensland asked me:


Do you come from down south?

(Queenslanders call the rest of Australia down south.) I told him I did, and he then asked me if I had attended Belmont High School. I was amazed that although he and I looked quite different, he knew who I was immediately, and after he asked me whether I came from Belmont, I instantly knew who he was.

table of contents
Posted by David McKay at 10:42 pm