PAGE TWO: how I got hooked on Music 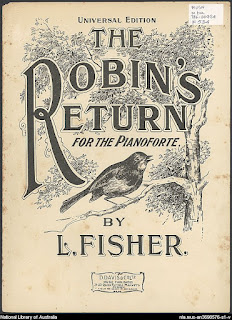 It's now 1954. I'm living in Russell St, Russell Lea, but one day, Mum turfs me out and sends me off to Aunty Peg's place. Aunty Peg and Uncle Ben have four children: Elizabeth, twins Robert and Margaret, and Susan.
I got turfed out for a few days because Dad was probably away working on a ship somewhere (as a marine engineer), and Mum was about to give birth to twins.
My cousin Susan remembers me sitting up in my high chair at the age of twenty months, captivated by Aunty Peg playing pieces on the piano like The Robin's Return and Dvořák's Humoresque.

And I'm still hooked, fifty-eight years later. If you play the piano, you can print out a free copy of this piece from the link above, and have a crack at it, yourself.

And you can hear what it sounds like in this enjoyable performance by Neville Dickie.

When I came back home, I had two new brothers: Malcolm and Christopher. Mum was so excited she wrote her one and only song about them, which goes like this: 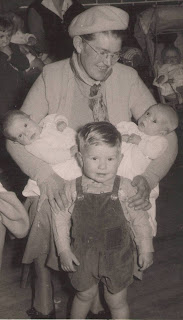 table of contents
Posted by David McKay at 2:23 pm