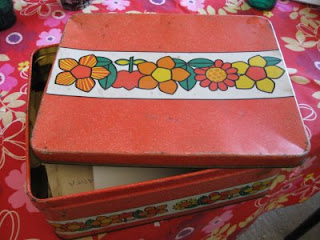 A few nights ago I looked through my cake tin which my wife gave me very early in our marriage. I was not a cook back then and didn't understand why she gave it to me and mumbled something like

Thanks, honey. I'm sure it will be very useful

and then she enlightened me when she said

You could put things in it.

Over the past 30 years or so I've used my cake tin to keep my treasures in. I later had to enlist the help of my Aunty Ruth's Globite school case, circa 1920, when I ran out of room in my cake tin.

My tin has lots of letters in it, including a few from my former Newcastle Conservatorium lecturers Michael Dudman, Nigel Butterley and from my Kenmore Christian College principal, David Hammer.

But it also contains lots of other bits of paper. There are several letters from my mother, my mother-in-law and other family members, but only one from my father. [I'm assuming Dad's letter is still there somewhere, but couldn't find it when I waded through.] And there is a letter telling us how much our former minister appreciated our daughter Cathy's leadership with the church youth group.

There is a letter from a former student who wanted me to write her a reference. It seemed odd that she would have to ask a person who had not seen her four years to do this, and I had to be honest and show that in the reference which I wrote. But I'm so pleased I still have her letter, because in it she said she would be

inturnally greatful if you could write me one.

But a lot of the stuff in my cake tin and in Aunty Ruth's Globite school case are Thankyous.
Posted by David McKay at 2:43 pm