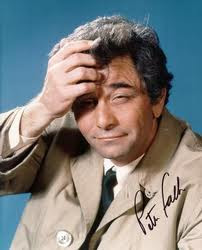 Peter Falk, creator of the unforgettable Lieutenant Columbo, a brilliant detective with a clever way of catching a crook, died on Thursday, aged 83.
In this enjoyable TV series, the inspector arrives on the scene in complete disarray, his trench coat rumpled beyond repair, his cigar wedged tightly between his stubby fingers. His pencil has gone missing again, rendering his notebook useless, until  a bystander takes pity on him and loans one to him.
To all appearances, Columbo is bumbling, inept and completely harmless. He couldn't think his way out of a wet paper bag, or so it seems. However the lieutenant has a simple plan that accounts for his remarkable success.
Greg Koukl, radio broadcaster and Christian apologist, has written about this technique in Tactics, an intriguing book  in which he provides a game plan for discussing your Christian convictions. (This technique could, of course, be used by anybody who wants others to think through the logic of their opinions.)
Here is how Greg presents The Columbo Tactic:


After poking around the crime scene, scratching his head, and muttering to himself, Columbo makes his trademark move.
"I got a problem," he says as he rubs his furrowed brow.
"There's something about this thing that bothers me."
He pauses a moment to ponder his predicament, then turns to his suspect.
"You seem like a very intelligent person. Maybe you can clear it up for me. Do you mind if I ask you a question?"
The first query is innocent enough. For the moment, he seems satisfied by the answer. Then as he turns on his heels to leave, he stops himself mid-stride, turns back, raises his index finger and says, "Just one more thing."
This leads to another question and another.

Columbo's tactic is to go on the offensive in an inoffensive way by using carefully selected questions to productively advance the conversation. Koukl concludes with this advice: Never make a statement, at least at first, when a question will do the job.

This is my light revision of Koukl's own words. A thought-provoking book. I've read it twice, so far. There are some interesting reviews of Tactics at www.amazon.com
Posted by David McKay at 2:36 pm